Through this operation Voicemod will expand its presence in the market through the launch of mobile applications, expand into Asia and invest in speech and voice conversion technologies based on neural networks through artificial intelligence.

👉 What is Voicemod and how did it come about?

Voicemod is a voice modulator for gamers and streamers with millions of users spread all over the world. Its technology is used by online players of video games such as Fortnite and other battle royale games to personalize their voice in the proximity chats of these platforms. Using a combination of AI and digital signal processing technologies, Voicemod offers users the ability to change the person's voice in real time to enhance the overall gaming and streaming experience, as well as to allow gamers to experiment with different characters.

Voicemod was founded by brothers Jaime, Juan and Fernando Bosch. The first version was released on the market in December 2010 and until December 2013 they worked in parallel on their development company. However, after a very successful marketing campaign in France that resulted in 450,000 downloads in one day, they took the decision to dedicate themselves full-time to the project.

👉 Which partners have accompanied Voicemod along the way?

In 2014 they crossed paths with Demium Startups, who introduced them to the world of business accelerators and business angels. At that time the application had just over two million downloads, but they had a recurring user issue. In an attempt to solve the problem, they decided to take the product one step further and allow their service to be used through calls, a project which they undertook in partnership with the accelerator Wayra.

Its investors also include Pianama, Demium Ventures and Jon Fatalevich.

👉 At what point did they take off?

After pressing on with VoIP calls, video selfies and other uses around voice modulation, they saw that the monetization cycle was getting longer and the money in the bank was running out.

In 2017 they put one last plan into action. They had detected that, despite their focus on apps, part of the traffic that reached them came through computers. They realized at that time that it was a niche of gamers who wanted to use different voices in the proximity chat of battle royale games. Taking advantage of this, on 22 November 2017 they launched their first version with 25 free voices

We are proud to have accompanied Voicemod on this great adventure!

Both our partner Antonio G. Asturiano previously, and the Aktion team today, have been working hand in hand with Voicemod since its foundation.

With the entry of Bitkraft, Voicemod can move forward in its mission of creating more entertaining and engaging interactive visual communication.

Here at AKTION we are absolutely delighted to have been able to support Voicemod during all this time and, above all, to be able to continue to do so in future! 🚀 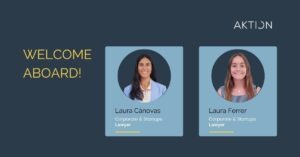 We are here for you
If you have a project or business and you would like to talk to us about any legal matter, we will be happy to help you.
Let’s talk
go

Do you want to work at AKTION?